Brooklyn and Her roommate Alaina get into a big fight over what to watch on TV. After wrestling over the remote for a few minutes….they decide to settle the disagreement…..like Girls!!! How do Girls settle a disagreement? With a Jerk-Off, of course!!! “I Challenge you to a Jerk-Off” Brooklyn declares….and Alaina readily accepts the Challenge. They call in their other roommate and tell him they need his penis….to settle a bet. He initially refuses…saying that he has a big Date…but when the Girls remind him that they have Cunts….he pulls his pants down. The Girls agree to play a Game of “Hot Potato”. Here’s the Game….each Girl shall get 20 Strokes…then the other Girl takes over for 20 Strokes. Back and forth….20 Strokes each…until the cock erupts. Whoever is Pulling on the cock at the time it goes off….shall be declared the Winner! The Girls shake hands….then they says “On your Mark….Get set…..JERK!!!” The action is fast and furious, as the Girls Jerk the cock with reckless abandon and what a finish it was!!! After several rounds….Brooklyn gets the cock to explode at the count of 19!!!! Wow!!!! Alaina watches as Brooklyn empties the cock, by spraying it for, what seemed like 15 minutes!!! The cum would not stop!!! The whole room needed to be hosed down after Brooklyn sprayed cum everywhere!!! Brooklyn now gets to watch her favourite show, “Family Guy”…while Alaina fumes. All’s fair in Love….and Hot Potato!!!! 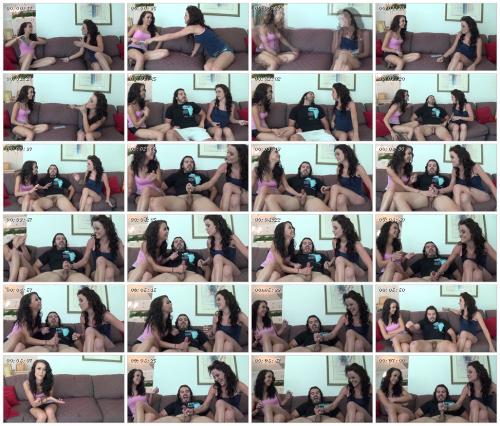